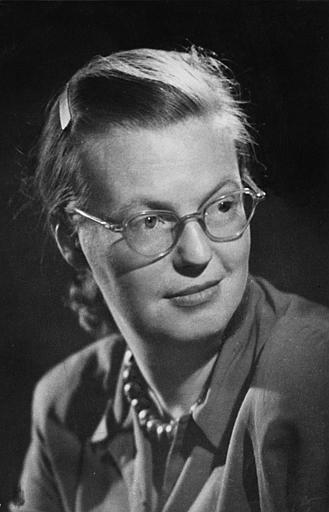 Shirley Jackson, a short story author, died at an early age of 45. We celebrate her birthday this month with a tribute to her achievement in writing stories that deal with abnormal psychology and levels of horror.

I love her take on life and on the craft of writing. She wrote, “I can’t persuade myself that writing is honest work. It’s great fun and I love it. For one thing, it’s the only way I can get to sit down.”

Jackson deftly wove a life of tranquility and domestication within her stories – with an underlying essence of darkness, setting a mood for doom.

In ninth grade, I first read Shirley Jackson as an assignment. Running out of time for my paper, I grabbed the story with the shortest number of pages, Shirley Jackson’s “The Lottery”.  Since then I’ve been hooked on short stories. ‘The Lottery’ takes you to a small town during the hot part of summer – an idyllic village where children play, tossing stones to and fro and the parents slowly gathering in the town square for the yearly lottery, slips of empty pieces of paper except for one – one with a black spot.  For those who haven’t read the story, it’s been called, “one of the most famous short stories in the history of American literature”.  The New Yorker published the short story in June of 1948 with the greatest outcry from the public, many of whom canceled subscriptions.  When a short story can move individuals – what an achievement. Although she’s best known for The Lottery, she’s also known for dabbling in ghost stories, one of which is considered on the the best literary ghost stories of the 20th century, The Haunting of Hill House. Dr. Montague, an investigator of the supernatural, visits Hill House hoping to prove scientifically the existence of ghosts. He, of course, invites several individuals to the house based on their past paranormal experiences where they shall live in isolation for the summer. If you haven’t had a chance to read the novel, please do.