I’m thrilled to bring my third review to you today, this time for Crown of Coral and Pearls by Mara Rutherford. 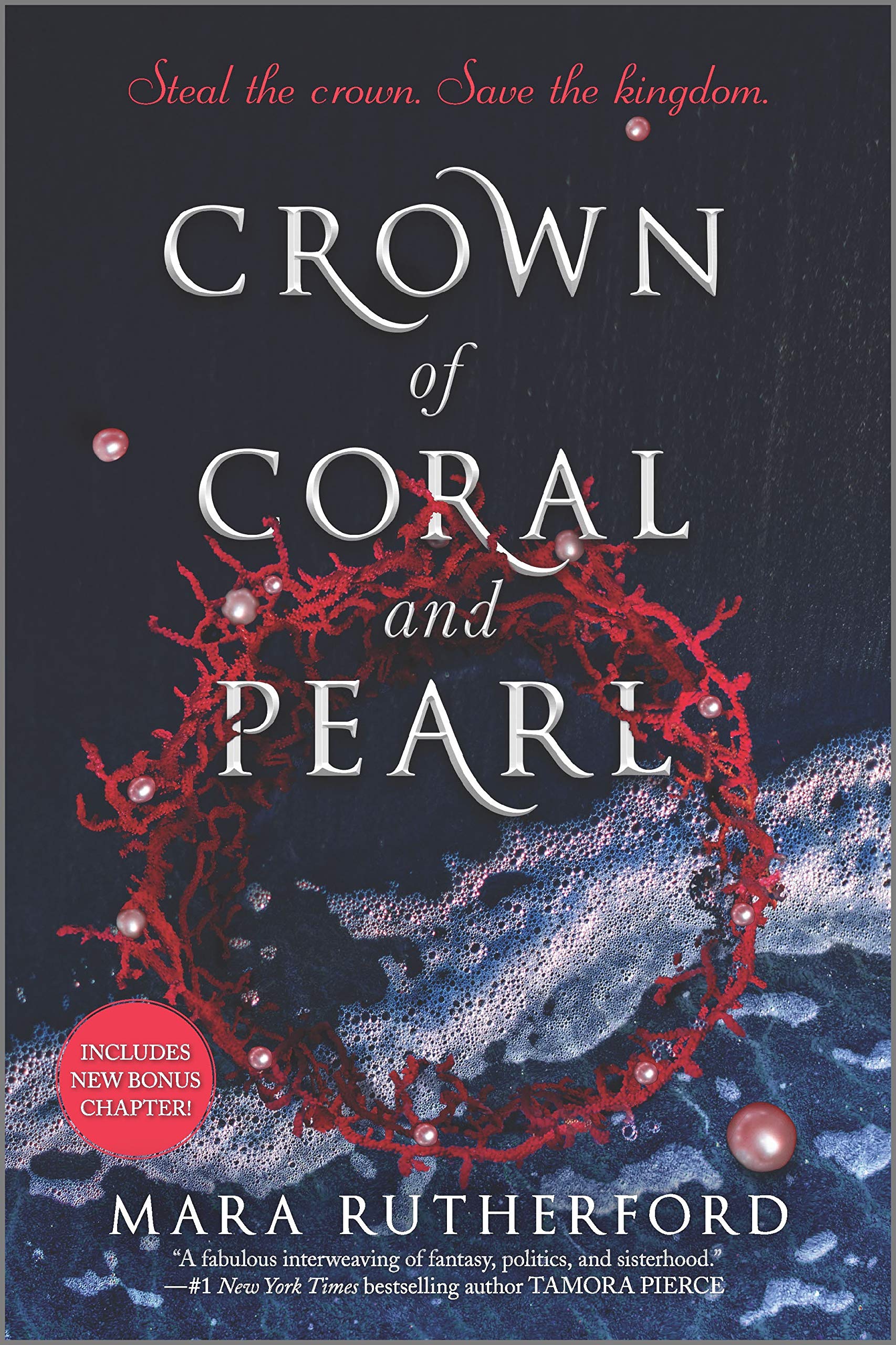 For generations, the princes of Ilara have married the most beautiful maidens from the ocean village of Varenia. But though every girl longs to be chosen as the next princess, the cost of becoming royalty is higher than any of them could ever imagine…

Nor once dreamed of seeing the wondrous wealth and beauty of Ilara, the kingdom that’s ruled her village for as long as anyone can remember. But when a childhood accident left her with a permanent scar, it became clear that her identical twin sister, Zadie, would likely be chosen to marry the Crown Prince – while Nor remained behind, unable to ever set foot on land.

Then Zadie is gravely injured, and Nor is sent to Ilara in her place. To Nor’s dismay, her future husband, Prince Ceren, is as forbidding and cold as his home – a castle carved into a mountain and devoid of sunlight. And as she grows closer to Ceren’s brother, the charming Prince Talin, Nor uncovers startling truths about a failing royal bloodline, a murdered queen…and a plot to destroy the home she was once so eager to leave.

In order to save her people, Nor must learn to negotiate the treacherous protocols of a court where lies reign and obsession rules. But discovering her own formidable strength may be the one move that costs her everything: the crown, Varenia and Zadie.

I’ve realized after the last few reviews I’m making the age-old mistake of judging a book by its cover (or more accurately, back blurb). I really thought I was going to fall in love with this book and its world, but I didn’t.

From my perspective, one of the book’s biggest downfalls was its awkward straddle of standalone/duology. I know it was sold as a standalone and had duology/series potential (as I write this I believe its sequel, Kingdom of Sea and Stone, is out) but to be honest, it didn’t feel like it needed a sequel to me.

Overall, I wasn’t thrilled. There were a lot of issues that kept me from liking the book, which I’ll go into below.

In Crown of Coral and Pearl, our narrator Nor wasn’t unlikeable, per se, but I also didn’t feel like I could relate to her or that I wanted to root for her. She was probably my favorite character, but that’s not saying much, as I didn’t like anyone else in the cast either.

A quick note about character names: I loved the thought behind “Nor” and “Zadie” but I literally rolled my eyes at the princes’ names – just a masculine version of their mothers’ names. It’s small and petty but added another reason I wasn’t into the book.

I think the hang-ups I have with these characters are their motivations. Everything read as half-baked; no one seemed to have an actual plan and just kind of did whatever they wanted. That’s fine, but there should have been someone to cull all those broken pieces of plot together instead of an out-of-the-blue sudden solution like there was.

The worst-written characters in the book were Prince Ceren (a weird Prince Joffrey knock-off with weak hints of Cardan) and Lady Melina (whose seemingly only purpose in the book was her last-spoken line, that easily could have been said by someone else). I actually loved the world of Varenia in the first portion of the book. When we move to Ilara the setting becomes less immersive, but it was still pretty vivid. Rutherford’s descriptions were a little lengthy for me, but as someone who tends to enjoy more info-dumping than the next person, it didn’t bother me that much.

The mythology was another story. It felt very jumbled… the only god I knew for sure was Thalos, who I believe is the god of the sea? I’m not a voracious fantasy reader, but even for me the mythology/religion didn’t seem super planned out and very basic – not unique at all.

Oof. The next three sections are going to get a bit scathing, so I apologize.

This book had little to no plot. Maybe it’s my fault that I read it after The Folk of Air series and I shouldn’t compare the titles… but c’mon. You can’t put “Nor must learn to negotiate the treacherous protocols of a court where lies reign and obsession rules” on the back cover and then not deliver those things, right?

Nor, who’s called Zadie most of the book (remember, they switcheroo’d?) isn’t shrewd, or clever, or intelligent. Any lucky break she gets is at the hand of someone else. Her actions read like a reckless, pouty child who’s mad about her lot in life and jumps into a reactive, rash plan instead of strategizing what will work best. I mention the Folk of the Air series because it’s a great example of what I think Rutherford was trying to accomplish. Jude from that series is clever. She has agency. She thinks through things. Nor, on the other hand, doesn’t seem to have agency and instead lets the wandering plot pull her every which way.

Also, why did the entire village need to know Nor was switching places with Zadie? Why couldn’t they have duped the entire village in addition to the Ilara kingdom? It seemed like a random, unnecessary stick to place in the metaphorical wheels of the plot. Maybe it was to give the sequel some drama with the Phaedra character, who is only named like 3/4th of the way through the book and apparently an unstoppable force? Don’t even get me started on her.

I don’t want to say I almost DNF’d this book (because I didn’t), but it was a pretty rough start. Again, I’m someone who doesn’t mind a good bit of world-building before the “big” inciting incident, but when that incident is the sisters’ switch and it takes dang near 150 pages for that to happen, I feel jipped as a reader. I kept flipping pages thinking when is this damn story going to start? and honestly, never felt like it really did.

Nothing very exciting happened throughout the book. Maybe the story was elongated in hopes of a sequel? Maybe I just didn’t get it? Let’s talk about the relationships between the MC and the other characters:

Nor and Zadie: By far the best relationship in the book, I just wish it was weaved throughout. When Nor leaves Varenia, it feels like that’s the last time she ever thinks of Zadie in a positive light. Throughout her time at New Castle, Nor only seems to compare herself to Zadie (while also acting in the exact opposite way she knows her sister would act) instead of talk about how much she misses her. When she does, however, those scenes are really good.

Nor and Sami: This was a really weird dynamic. It seemed like Nor was interested in him in the first few chapters, then we learn that Sami has always liked Zadie, then Zadie’s all coy until it’s too late, then all of a sudden Zadie’s willing to die for this dude and Nor’s a little jealous. The “brother-sister” dynamic was pounded into our heads with Nor and Sami but it really felt to float in the middle for me. That dynamic wasn’t 100% believable.

Nor and her father/mother: I loved Nor’s relationship with her dad, and her mom turned into a piece of work out of the blue… so much so that she seemed almost as cruel as Prince Ceren? I wasn’t a fan of her mother’s characterization so most of my problems with their relationship stem from that.

Nor and Prince Ceren: I thought Prince Ceren was one of the worst-written characters in the book, which made his relationship with Nor beyond chaotic. There were hints of what the point of his characterization was throughout the book (a boy who felt he wasn’t worthy of love and pushed people away to test their loyalty) but it wasn’t executed well. Reading his relationship with Nor ended in whiplash with every scene.

Nor and Prince Talin: Completely unbelievable romance. I was not rooting for them to get together. Also, do not tell me after seeing Nor for like one dinner a week before they met he could immediately tell the difference.

Nor and Ebb: This was a cute friendship, though semi-insignificant.

Nor and Lady Melina: As I believe Lady Melina was unnecessary to the plot, I believe this taboo friendship wasn’t needed either.

Nor and Lady Hyacinth: Honestly I have no idea why Lady Hyacinth was even in this book. She made no impression on the plot whatsoever.

Look, as a writer who hopes to be published one day, I hate giving poor reviews. I do think constructive criticism is helpful, though, and will give this author another chance on another book series. As for this book though, I won’t mask my disappointment. I wanted more from this story because it had really great bones. It just didn’t live up to my expectations, which was a bummer.

I haven’t decided if I’m going to buy the sequel yet, because I honestly don’t really care what happens to any of the characters. The end was tied together nice enough for me to be satisfied with the ending.

Did you read Crown of Coral and Pearl and love it? Hate it? Tell me in the comments!