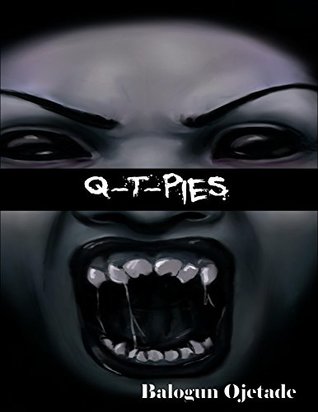 I was gonna talk to you all about all sorts of topics related to this book, like intra-race relations, misogyny, black women in horror, all those good things…but the more I read Q-T-Pies the more I just kept thinking…

Repeating over and over again like a broke record. Now, that’s not a bad thing—in fact, that was pretty much my first thought reading Beloved as a teenager. Yes, with swear words. Well, probably more like “this mess is [bleep] up.” But you know what, I like it.

Q-T-Pies is book zero in the Savannah Swan files. Who that glorious person is you’ll learn later, but for now let’s talk about this early case. The novel starts out with a poignant short essay regarding the emergence of black horror in the current United States administration, and regardless of what side of the spectrum you fall on if any, it’s a good read. From there, we learn this story is set in Atlanta, and a new pop-up restaurant has opened. Run by three incredibly intelligent, alluring, sexy, beautiful black women, this new joint specializes in selling barbecued pot pies…wait a minute.

Barbecue pot pies? A pop-up diner? Atlanta? Wow, this may be the southernest I’ve felt in a while. In previous reviews of horror works set in the south, I have advocated doing something a lil’ different–no more bayou witches and oversimplified witches for a while. So for a story to take place in modern Atlanta and tackle with the issue of fad dining and gentrification? Fantastic. Oh, if you’re not sure what a pot pie is, well, it’s…a pastry dish filled with veggies and or meats. Damn, I made myself hungry. The first half of the novel deals with feedings of various kinds and does a great job of assaulting your senses with smells, tastes, and interesting visuals that will make your mouth water and occasionally make you gag..

Forgive me for straying, but we learn that our intrepid hero reporter Derrel Lacey is on the beat. At this point you might be thinking, “hmm, we focus on female-centric works here” and yes, the protagonist is a man. But this plot is very much driven by women to the point where poor Derrel might as well be a side character in his own story. Ojetade gets us involved and does the great trick of revealing who the real protagonist here is as we start the second act into the third. Hint, but it ain’t the three aforementioned ladies…

Oh yes, what about these alluring sirens? Well, would it be a spoiler if I told you these immaculately described creatures are up to something shady? How about they are evil? Okay, they’re…well, they’re not vampires. I wish the book had expounded more upon their true natures because as described, they are basically perversions of science and magic wrapped up in mythology and it’s a little much. All I’m saying is I can see us hashtagging this on Instagram in the future. But how do we know they’re evil Because they are repeatedly described as inhumanly beautiful and intelligent.

Okay, that’s not fair. I don’t think it was Ojetade’s intention to set up these successful black women as the antagonists to the not-very-successful and kind of bumbling black man. This had me going back and forth for a bit–we have seen the trope before of ambition making people evil, but something weird happens when it’s implied to women. It implies that if women start reaching beyond their means, some kind of vicious karma and/or demon is going to smack them back to earth like a “oh no you don’t!” This can be spun around as symbolism like, say, patriarchy or aspects of kyriarchy holding women down. Here, it’s kind of an accident but just looks…well, it looks that way. Fortunately, as I said this book is very female-driven, so we are presented with a number of character archetypes that will let you focus on Ini, Dalmilola, and Chioma as the villains.

So, you might be wondering by now, seems pretty stock but good so far. What’s the messed up part? The isht being bleeped up is when we start to unravel just what the three sirens are, and their plans for Derrel. They’re not good plans. Similar to when I mention Beloved above, the messed up part is the cruelties inflicted upon Derrel and other characters is pretty shocking. Would it be more shocking if this involved white characters? Not more shocking but definitely on a different level. Q-T-Pies exists in a very real universe where we don’t have hashtag-woke conversations about supporting black business and community. No, here we have three black…beings inflicting damage on another black person, and a black female hero to save the day (that is Savannah Swan, if you haven’t caught my drift).

Unfortunately, we meet Savannah proper quite late in the novel, so to talk too much about her would be massive spoilers. And that would suck, because I definitely think Q-T-Pies is worth picking up. It is a quick read and will give you plenty to think about, salivate over, and maybe keep you up at night the next time a hot, trendy new restaurant opens up in your neighborhood. You just never know sometimes…pick it up from Amazon here, and if you’re ready to just delve into the weird world of Savannah Swan, start here with A Haunting in the SWATS.