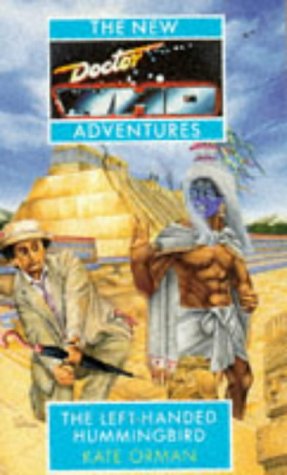 This – as proudly announced on the back cover blurb – was the first Doctor Who New Adventure novel to be written by a woman; in fact, I think Kate Orman was the only female author for the New Adventure series. Doctor Who is now a popular BBC TV series again, but it was discontinued in 1989 after 26 years and Virgin Publishing issued a run of novels from 1991-1997 continuing the well-loved time-traveller’s story. It’s always a challenge to take on someone else’s characters, and some of the novels work much better than others, but I found The Left-Handed Hummingbird particularly tense and gripping.

The Doctor, in his seventh incarnation (as played on TV by Sylvester McCoy), has been travelling through time and space for a while with two very different women: Ace, a 20th century streetwise Londoner, and Professor Bernice Summerfield, an archaeologist from an Earth colony of the 26th century. A mysterious note, which reaches them in the middle of the 21st century, brings the three travelling companions to Mexico City in 1994, to the hospital bedside of psychically sensitive Christián Alvarez whose timeline they’re already entangled with. Christián has been counting on their arrival, thinking everything will be OK when the Doctor arrives, but the Doctor has no idea who Christián is. The time-travellers aren’t hitting Christián’s timeline in chronological order, which doesn’t help his fragile mental health.

The New Adventures novels, not bound by the rules of teatime family entertainment, took the opportunity to delve deeper and darker into the Doctor’s world, which is what makes this novel work so well as a thriller. Shuttling backwards and forwards in time with the Doctor and his friends we encounter drug-taking hippies flirting with dark forces in 1960s London, human sacrifice in the Aztec empire of the 15th century, the panic and chaos on the Titanic as it begins to sink, and the senseless murder of John Lennon. Not to mention a few other deaths along the way, possession by a vengeful god, and some horrifying near-misses for some of the central characters. Someone has been messing about with time, including events that happened in the Doctor’s own past, and it’s going to take a lot of sorting out.

The Left-Handed Hummingbird is one way of translating into English the name of Huitzilopochtli, the Aztec god of war and the sun. His influence extends throughout the timeline of the novel, and various related aspects of Aztec mythology are woven into the story, with some surprising explanations for them. It was interesting to see such a strong thread of manipulation and control, when it wasn’t the Doctor doing the controlling. There’s also a recurring theme around Ace’s readiness for violence and affinity with weapons, and whether the Doctor’s disapproval is reasonable or not.

I’ve watched maybe a tenth of the TV episodes, read quite a few of the books and listened to most of the Eighth Doctor audio adventures, but I wouldn’t call myself a Doctor Who aficionado. I don’t think you need to know much more than that this guy is pretty old and travels through time in a blue box to enjoy The Left-Handed Hummingbird, though obviously if you do know more about the set-up you’ll pick up on various references or perhaps be quicker to spot where a plotline’s going. All in all, the novel’s an easy read (apart from some of the unfamiliar Aztec names), while being more satisfying and thought-provoking than many Doctor Who novels.