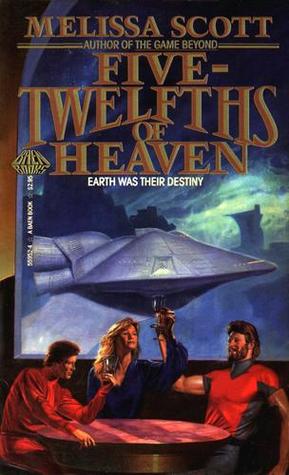 My biggest regret about reading Five-Twelfths of Heaven recently is that it took me so long to get around to it.  Melissa Scott‘s novel was originally published in 1985, and it’s still relevant thirty years later, not to mention it’s a captivating story. The first book of Scott’s Roads of Heaven trilogy, Five-Twelfths of Heaven begins when the star pilot Silence Leigh arrives at a Secasian probate court to negotiate for her share of her grandfather’s estate after his sudden death. When we first meet Silence, she is veiled, as women are required to be on Secasia, and she lacks a male guardian’s representation, as women are required to have. Neither of these rules suit her, but Silence knows how to navigate not only space, but the laws of the Hegemon empire. By the end of the first chapter, she’s lost her grandfather’s ship Black Dolphin, but secured a position as a pilot on Sun-Treader and formed an alliance with Sun-Treader‘s captain Denis Balthasar and engineer Julian Chase Mago.

The story might be considered space opera, but Scott’s detailed world-building is fresh and fantastical, involving starships with harmonium drives powered by the music of the spheres, pilots leapfrogging their ships from sun to sun using metaphysical starbooks as interstellar space guides, powerful magi wielding mind control tactics, and a ruthless empire expanding throughout the galaxy.   Silence’s partnership with her new husbands Balthasar and Chase Mago is a three-way marriage – practically, to gain citizenship and greater freedom of travel; and ultimately, based on mutual respect and growing friendship. But there is much more to Silence than even she knows, and only after she survives multiple ordeals at the hands of pirates, the magi, and the empire’s minions will she discover her true talent and her purpose.

This is a major simplification of the complexities and delights of this novel, but to impart any more of the plot would be an injustice – the book deserves to be read – or better yet, heard.

A great reader can transform a mediocre book into entertainment. A great book read by a gifted professional can be a riveting experience not easily forgotten.  The audiobook recording of Five-Twelfths of Heaven is narrated by Arielle DeLisle, an accomplished voice talent, producer, and entrepreneur with her own recording studio in Arizona.  She read and produced the Five Twelfths of Heaven audiobook in her first home studio, a converted master closet with excellent sound quality due not only to acoustic paneling but DeLisle’s unneeded winter coats (that’s one way to use winter wear in the desert!).

Arielle DeLisle’s voice is perfectly suited to portray the young, determined Silence. Silence is both vulnerable and strong-willed, qualities that arise in DeLisle’s softspoken delivery and deliberate cadences.  DeLisle accomplishes something that very few audiobook readers are capable of: she imbues the character of Silence with vibrant personality. Silence Leigh comes to life through DeLisle’s voice: sweet-natured but not without nerve, young but mature, straightforward and sarcastic, too.

Of course, there are other characters who speak – the book’s dialogue is spot-on and flows wonderfully, conveying much knowledge of this spacefaring world without resorting to numbing info-dumps – and DeLisle succeeds at making each, male or female, unique and recognizable. Only occasionally did her interpretations of Balthasar and Chase Mago overlap for me, but I think that may be due more to Scott’s lesser focus on the character development of the two men. In contrast, DeLisle’s low, sinister personification of the magi perfectly captures their diabolical nature. Her reading moves seamlessly from dialogue to narration without any distracting jumps, and her delivery is crisp and clear. She’s also quite adept at conveying physicality in the novel. A magus’ mind control manifests in one way through negative reinforcement – each time the victims think subversively or plan escape, they are stricken with stomach pain and nausea. Listening to DeLisle interpret the characters’ suffering is a visceral experience.

With so many exotic names and concepts, I can imagine it must be difficult for a scifi/fantasy narrator to translate a story’s believability and legitimacy. In this case, Melissa Scott actually provided DeLisle with a pronunciation guide to the vocabulary, names and places in her universe, a true gift to both narrator and reader.

Arielle DeLisle records in her fancy new VocalBooth these days, no more winter coats, and better ventilation for those scorching Phoenix summers. She’s not only passionate about great books, but female entrepreneurship. She emphasizes women’s peer groups and mentoring as beneficial to her in her field. “Being in the trenches with others who want to see you succeed has been extremely helpful to my professional growth. Ultimately, we’re only competing against our best selves and trying to reach our full potential, and it’s not about competing with each other.” Sadly, Books 2 and 3 of the Roads of Heaven trilogy have not been recorded (by anyone) – but according to Scott’s editor at Crossroad, something may be in the works soon. In the meantime, you can read the e-books: Silence in Solitude, followed by The Empress of Earth.  Beware, however, that Scott has apparently rewritten parts of Book 3 for the ebook edition, so feel free also to pick up a used paperback copy of The Empress of Earth.