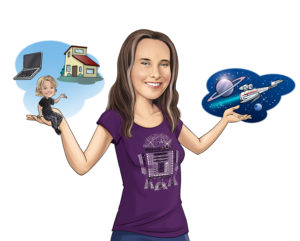 A. Francis Raymond, known to friends as “Ray,” is a physicist and astronomer and long-time science fiction geek.

Although writing on and off for years, as of today, Ray has started infinitely more stores than she’s ever finished and not many bytes of text have made it off her computer and into the world. Not yet. They’re coming, don’t worry.

Ray is inspired by many of the classic sci-fi authors, especially Isaac Asimov. She loves to write about robots and at least 75% of the unfinished pieces sitting on her hard drive have a robotic or android main character. She also likes statistics. 93% of the time.

Ray primarily writes “fantastical science fiction.” What the heck is that? Fiction, with some basis in “science’ but meant to be thought experiments that result in fantasy rather than someone she believes could really happen.